As part of the assessment team for the Association of Advanced Professional Game Angling Instructors I travel to Loch Leven twice a year to jointly assess with the Scotish Anglers National Association, potential new instructors trying to gain their Scottish Game Angling Instructors Certificate and this year was no exception, which I might add, coincided nicely with the heavy rain we were expecting in the Eden valley which would raise river levels again and ruin the fishing for another few days. That said, apart from some strong winds, we got some nice conditions at Loch Leven and when the sun was out it was tempting to go fishing on the Loch, although it was deceiving and besides we had to work instead. Never mind, that's life! and we did get to see some good new instructors coming through the ranks.
When we returned the Eden, true to form it had begun to rise and by yesterday it was chocolate brown ruining the chances of any Salmon fishing and even more important spoiling what should be the start of the good trout fishing, although I have a sneaky feeling 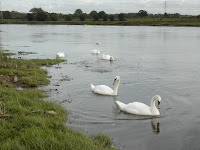 that it could be a bit later this year unless things warm up a bit soon.
Today saw the river continuing to run high keeping us all away, but at least the weather is better and hopefully if the forecasters have got it wrong for later in the week we might be able to fish at the weekend with the possibility of a Spring Salmon or a trout or two on the higher reaches where the water will clear first. Watch this space!
Posted by Clive Mitchelhill at 31.3.10

Tuition and a bit of Fishing

Mostly busy with casting tuition this week with both single handed and double handed fly rods and although the trout season has started, many anglers are making sure that their casting skills are up to speed especially with the Salmon rods, in anticipation of the new season kicking in proper. There have been a few fresh fish caught throughout the system with both numbers and the fish themselves into double figures although the river is still holding lots of Kelts and even though they are continuing to drop down the river there are still many of these spawned out Salmon holding in the higher beats reluctant to make a move. This in my oppinion has been dictated by the low temperatures we have been experiencing and maybe these slightly warmer days we have had recently will encourage the remainder to drop back down towards the sea. Possibly the snow melt we will get soon coupled with the additional rain we are supposed to get next week will be of some assisstance. I say possibly because believe me, regardless of the amount of water we get if they are not ready to go then they won't.

The trout season has started slowly which was expected and was not made any easier by the slowly rising water level throughout the day, although the beat we were on today did produce a couple of small fish and there was quite a reasonable hatch of Large Dark Olives in attendance and I did see one fish take one off the surface but that was all, everythig else was sub surface and heavy bugs were the order of the day.
Posted by Clive Mitchelhill at 22.3.10

Spring is in the air

It has been very pleasant on the river over the last few days with temperatures continuing to rise and it has actually been quite warm in the Sun in comparison to recent weeks, at last Spring is peeping through with more and more Snowdrops beginning to show and new willow buds appearing on the river banks. Fly life is still very slow as you would expect and I have only been witness to a cluster of tiny Gnats yesterday and nothing more, although this can only be a good sign.
The Brown Trout season is upon us again tomorrow March 15th on the river Eden and although I will not be out myself as I have other commitments with Borderlines which is a

not for profit company I am involved with dedicated to introducing people from all backrounds to angling and the environment, mainly children, I will be out later in the week with clients teaching casting and fishing techniques and hopefully we can catch a couple then, although I suspect that later in the month and into April will see some better chances. 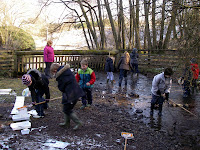 As mentioned above we will be with schools tomorrow which is a follow on fishing session from indoor talks and an entomology session we delivered to them last week, so hopefully they will have an insight into the fishes diet before we even get started.
Posted by Clive Mitchelhill at 14.3.10 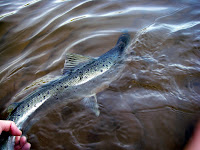 comparison to recent conditions and gave me the incentive to fish on into the early evening. Several Kelts were beginning to splash about in the lower reaches and reports were coming in of a few Spring fish also beginning to show themselves which is always a good sign. I even managed to make contact twice during the latter part of the day, the first of which was a Kelt which was quite apparent from the outset by the way it reacted on the rod, but the second seemed quite a substantial fight and I was not so sure, but as we parted company after about 30 seconds we will never know.

There seems to be more and more goosanders appearing on the river these days and today was no exception. They are very adept at identifying the most productive areas for fishing on the river for obvious reasons which is often a problem especially as they will take small trout and Salmon Parr as well as Smolts which will be showing up in numbers in another month or two.
At last the trout season is just around the corner and as well as having a few people already booked in for tuition, fishing and guiding for these hard fighting over wintered fish, I will also be taking every opportunity to catch a few on the fly myself. Last year was very productive especially between the end of March and the end of May when some of the better quality fish can be targetted before the Summer months get underway when you have to be more selective to avoid a multitude of smaller fish. Good sport though.

Although the Grayling season is closed from the 15th March to the 15th June inclusively, because these beautiful fish are so prolific throughout the river Eden system they are often unavoidable with the fly when fishing for trout especially around April time. This is almost certainly due to the fact that they are shoaling up for spawning at that time. As long as you are not specifically targetting these fish and you do return them as gently as possible without harm then this will not be a problem and from June 16th we can target them once again for some good sport.
Posted by Clive Mitchelhill at 6.3.10