Through the night on Saturday 10th July the river Eden rose around two foot and coloured which made Sunday 11th on the lower river unfishable which would normally be a bit disappointing, especially as I had to cancel a trout fishing session, but as we have had no significant water whatsoever for many weeks this was very welcome and gave us hope for the Salmon fishing as this water could certainly encourage fish to enter the system.
Although there were a few fish caught and a few good ones at that, as well as a few Sea Trout in places, it was not spectacular, but the water did hold it's level for a while with the upper river a good colour to fish the fly and on the Tuesday, Wednesday and Thursday 13th - 15th I enjoyed the company of Chris, Andrew and Alan who were up from Wales on a fishing holiday with me. Alan was one of a party of four that came to Norway with me on one of the Salmon trips I used to arrange with a friend in Norway. All three came into contact with Salmon on the last day but unfortunately only briefly. Chris also indulged in a bit of trout and grayling fishing with some success. 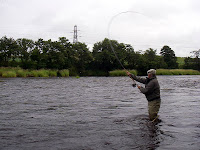 Saturday and Sunday 18th & 19th were taken up with some single and double handed fly casting tuition with Sean and Stephen (pictured here) and Monday was to be a trout fishing session but the water rose again and the day became a tuition day looking at casting and fishing techniques.
Bit of me time on 20th - 22nd July as I headed off with a friend to the Dovey in Wales for some Sea Trout fishing only to find upon arrival the river in full flood for almost the whole duration of the trip apart from the last four hours when I did manage to wet a line but to no avail, although the guy in 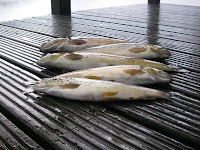 front of me proceeded to pull out a nice Sea Trout of 8lb. As the river was out of order we were given a real treat as we were taken by our very good friend and host Illtyd Griffiths to the most beautiful lake up in the Welsh hills to fish for wild brown trout and despite the rain water which had also effected the lakes clarity we did catch (between the two of us) 15 nice wild brownies of which we kept five and returned ten. In addition to this whilst we were away the river Eden rose again approximately four to five feet which gave it the good flush through it needed for the Salmon fishing.
By Saturday the lower river Eden was still holding a bit of colour although a few fish had been

caught on spinners, but the upper river was running nice with just a little colour and in the afternoon I had Jake and his young nephew Tom with me to do some Brown trout fishing, with the intension of Sea Trout fishing later on that evening until the early hours. Jake managed a couple of nice Brown trout up to just under 2lb and as for the Sea Trout fishing, he hooked two very good fish one of which parted company quite early and the second proceeded to crash about on the surface (which Sea Trout have a tendancy to do when first hooked) before it too parted company, this would be a fish of about 3 -4lb as we both got a good look at it on the surface. 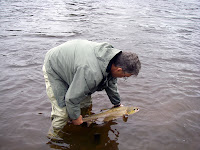 Sunday saw the lower river still high but coming into good condition with the water still coloured but clearing nicely and after a short casting session with Mike and despite not seeing any fish at all I did manage to hook and land a nice fish of around 9lb on the fly which was promptly returned as it was a coloured fish likely to be a Spring fish that entered the river a while ago although it gave a very good account of itself during the fight which is often the case with a well rested fish. Several other fish have also recently been caught throughout the system with fish of around 17lb being recorded. Large Grilse runs have yet to be seen although I am sure they are on their way as they did arrive late last year.

The Brown trout fishing was also very good yesterday and I managed 14 fish on the upper river up to one and a quarter pounds on goldheads, spiders and on the dry fly as fish began to rise in the evening. I kept one for the pot.
Posted by Clive Mitchelhill at 27.7.10

On Friday 2nd July I flew over to Ireland with three fellow instructors and very good friends, Illtyd Griffiths, Gary Champion and Karl Humphries to represent AAPGAI at the Irish International Fly Fair, a very successful event which has gone from strength to strength since it's inception in 2008. The event encorporates fly casters, fly dressers and many other angling related parties from around the world in the beautiful setting that is Killyleagh which overlooks strangford Lough. The event evolved from an environmental enhancement programme based around the local Dibney River through an organisation formed in 2007 and now known as the Dibney River Conservation Trust which does excellent work with both adults and youngsters alike to promote a better understanding of the benefits local rivers can provide to the community. 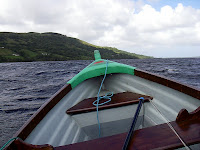 Whilst over there we met up with several friends from APGAI Ireland (Advanced Professional Game Angling Instructors) many of whom are also members of AAPGAI in England who were also involved with the casting instruction at the Fly Fair.
Following the Killyleagh event I travelled from there with Jim Hoy, (a very good friend of mine and member of both AAPGAI & APGAI Ireland) 3 hours down the road to where Jim lives on the banks of 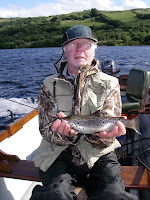 Lough Melvin (literally) where I had the good fortune to spend 3 days with Jim and his lovely partner Lillian in such an idyllic setting where we fished very successfully for two species of trout known as Gillaroo and Sonaghan which are unique to Lough Melvin. Jim is the Head Water Keeper for the Southern side of the Lough and has fished Melvin most of his life which certainly showed in his ability to catch these hard fighting fish as well as being able to locate them in often changeable conditions. Anyone wishing to take a trip to Lough Melvin to fish for these fantastic creatures as well as having a chance to hook one of the many Salmon we saw jumping on the Lough, I can certainly recommend Jim who can arrange all the facilities you require for your trip. You can contact Jim on the following email address: jimhoyflycasting@gmail.com 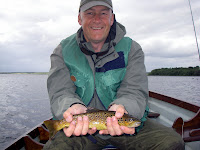 The Gillaroo (which comes from the Irish for Red Fellow) are generally found in the medium to shallower areas of the Lough (just offshore) as they are predominantly bottom feeders, feeding on such things as snails and caddis larvae etc and are great fighters themselves with there butter coloured bellies and deep bright red spots, but when you get hold of a good sonaghan (which generally prefer open water) which I would describe as a dark steely looking fish with black spots, long pectoral 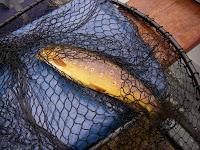 fins and a tail that is disproportionate to it's body (bigger) you soon know it, and sometimes you even think you have hooked into a grilse, as although they are not big fish they do have the tendancy to pull the rod tip under the boat. A fantastic experience and one I suggest you should try.
Posted by Clive Mitchelhill at 10.7.10