Positive Signs on the River 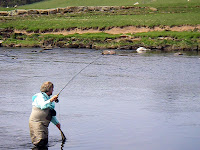 At last, things are beginning to step up a gear on the river as temperatures begin to warm up, and those of you who do a bit of trout fishing will know that things have been rather slow of late. Not so now though with the insect life increasing in the form of large stoneflies, some very good hatches of Grannom (Sedges) carpeting the river in places and a few sporadic hatches of Large Dark Olives still in attendance, and the Brown trout fishing has really kicked in. I was on 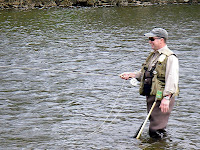 the river with Andrew and Charlie toward the end of the week as they proceeded to catch six fish between them to around 1 1/4lb, (all returned) with an added bonus when Charlie actually managed to hook, but unfortunately loose a substantial Rainbow Trout (on the duo) which almost came to the net, obviously an escapee from higher up the system. Andrew also missed a few good fish on the spiders as they nipped the flies in the surface film. 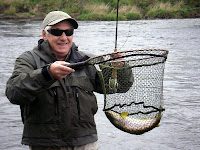 Yesterday I was out with Doug, who I met in 2005 and he has been coming once or twice a year ever since to successfully fish for both Salmon and trout. On this particular occasion he came to do some trout fishing and keep up to speed with his casting which I was really impressed with as I remember when he first came and he has come a long way since then. The day started with a bang and did not stop. He played and landed five really good quality Brown Trout, the smallest being around 1 1/4lb with a couple of good fish around the 2lb mark. He then continued his run with 2 herling (small Sea Trout) 2 Grayling the biggest definitely being over 2lb 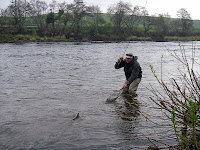 and just to top it off he hooked and played a nice silver Salmon of around 5 - 6lb which eventually managed to get the upper hand and shed the hook. All of this action was on a 9ft 3inch 6 weight fly rod. After successfully setting the hook on all takes bar three during the day, Doug sat down and in his own words said "did that really happen". 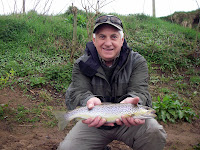 The most significant piece of information that became apparent throughout the day was the substantial amount of very fresh Grilse between around 4 - 7lb that were creeping through on very low water and we saw between us a couple of dozen on the day of what can only be described as early running Grilse. Long may it last!
Posted by Clive Mitchelhill at 26.4.10

Back to Low Water Conditions

Over the past week the river has been steadily falling to present low water conditions on the Eden and the Sand Martins which arrived in late March are now beginning to build up in numbers. Hopefully if the temperatures can find some kind of normality 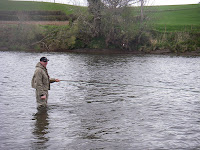 it might even persuade the fly life to increase and induce some good Brown Trout activity. There is still plenty of snow on the hills to keep a steady flow once it begins to melt and even though the water is low at the moment I have personally seen a good number of spring Salmon entering the river on the tide this weekend with a scattering of fresh Sea Trout in amongst them, so things are looking very healthy. 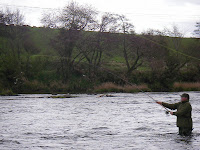 days and newcomers to Salmon fishing, Richard and Patrick (above) were putting out some nice lines over the weekend and were unfortunate that one of the Springers we saw did not take an interest in their offerings (maybe next time). 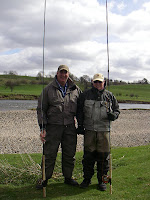 Yesterday and today I have been out with Ron and Ian (which is always a pleasure). They have been trying out some shooting head systems (amongst other things) in preperation for their pending Norway trip in June where they will be fishing the Gaula and other rivers whilst they are there. "Good luck to them", I hope they have a successful trip.
Posted by Clive Mitchelhill at 19.4.10

Hi all, I have been off the scene for a few days down in Wales for the AAPGAI biannual

assessments, workshops and demonstrations which were once again a roaring success with 9 candidates attaining their qualifications, in all three catagories, which included Trout, Salmon and Fly Dressing disciplines, with 3 successful Provisional members, 5 Advanced members and one Master which is our highest qualification. If anyone is interested in becoming an AAPGAI instructor, then further details can be viewed by clicking here.
Whilst I was away, several Spring Salmon were spotted running the river with a few fish being caught. This is normally the case when I go away and not entirely unexpected as we did have a rise of water just before I left, and just to top it off I received the usual phone call to tell me I should be on the river. "Typical". 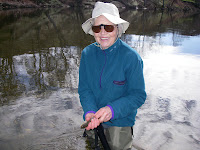 The weather remains unpredictable with one day being quite warm and the next turning back to winter again, but one of my regular anglers, Fay, did manage to catch her first Brown Trout of the season all be it a small one.
Posted by Clive Mitchelhill at 12.4.10 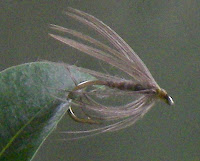 The river is on the rise yet again, holding back the trout fishing for at least a couple of days which seems to be the norm lately, although we did manage to target a few trout on Saturday and Charley who was over on a trip from America, managed to land a couple of fish at the eleventh hour on the scud, which is a shrimp representation, and on the Water Hen Bloa which is a spider pattern that was fished just in the surface film as a few trout begun to rise for a very short period in the late afternoon, picking off a few Large Dark 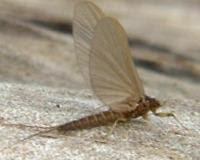 Olives that were sparsley hatching. He also had a couple of close calls where the trout got the upper hand, (as they do) but as quick as these trout appeared, they also disappeared, leaving the water looking devoid of fish, just as it did before they became active, but we know they are there.
Sunday saw some Spey casting tuition with the Salmon rods on the lower Eden where the water was much bigger due to there being three main tributaries entering the system downstream of where we were fishing on Saturday, but this did not 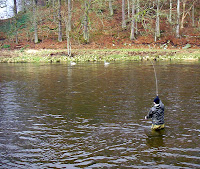 pose a problem as the day was simply based around casting techniques and not fishing, although for all the water was high, it was clear enough to catch fish, but with the extra rain through the night a lot of the water courses were beginning to colour up today and run into the main system yet again.
Posted by Clive Mitchelhill at 5.4.10