The End is Nigh

The end of the Salmon season on the Eden is now upon us once again, where does it go it seems to get shorter every year. We have still been catching a few fish though regardless of the fact that this year has probably seen fewer fish running the river than we saw last year although when Sam and Larissa (originally from New Zealand) came along for a session higher up the river we did see quite a few fish even though they did not 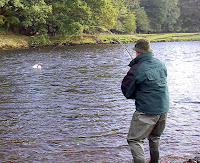 connect with any of them. This was there first time fishing for Salmon so much of the time was based around the casting techniques required to present the fly to the fish which they certainly got to grips with later in the day.
David Humble came along later in the week for an annual brush up of his (much improved) Spey casting techniques and almost﻿ immediately hooked up with a fish whilst we were going through the mechanics at the start of the day, a really fresh hen 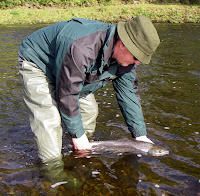 fish of around 7lb which was not hanging about as you can see in the picture above and whilst we were having a chat toward the end of the day a coloured cock fish of about 5lb﻿ grabbed the fly and also made haste across the pool. Both fish took the cascade a fly which has fished tremendously well for us all season.
Kevin Earl arrived the next day but unfortunately had to cut the session short  as he had to get back home to attend to some personal business in the afternoon, but whilst he was there he fished the beat well and was unlucky not to make better contact with a fish that actually grabbed his fly twice as it came across the tail of the pool. 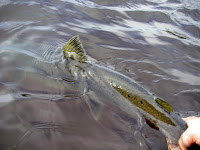 As I now had a spare afternoon I was determined to take full advantage of it and fished for myself a little lower down from where Kevin missed the fish and managed to hook and land a cracking hen fish of approximately 15lb (also on a cascade)which I quickly returned to the water whilst trying to make a few rapid clicks of the camera as I held the fish in the water to give it time to recover, not easy to get a good shot I can assure you as you can see by the picture on the right.

A little bit of mentoring the next day with John who was working towards his advanced trout assessment for his AAPGAI full membership and we both did a little bit of fishing at the end of the day as we had spotted a few Salmon moving through the beat as we were going over one or two things with the trout rod throughout the day but although conditions looked really good in the last hour of daylight we did not conect with any fish at all.

Unfortunately I had to miss the last day of the season as I was off to Wales for one of the AAPGAI biannual assessment events, which I din't mind really as they are very worthwhile events and a great get together with some good assessments and fantastic demonstrations on the open day. These events are most certainly going from strength to strength and this one was the best by far. If anyone is thinking of attending one of these open days I would certainly reccommend it, the next one will be held at Cockermouth on 26th March 2011 and well worth a visit whether you are simply looking for a good informative day out or you wish to learn more about the instructor route and what is involved.   Here is the link: http://www.aapgai.co.uk/body/events.html#openday

On returning home things are relatively quiet at the moment with the end of the Salmon season on our river and the inclement weather we have been getting with more to come, although I have been out giving a couple of tuition sessions which were very enjoyable and with the water once again running high and coloured I am now bracing myself for some good Grayling fishing once the water drops and clears again "soon I hope".

Remember Spey casting tuition with both single and double handed rods is available throughout the close season and the Grayling fishing can be phenominal when the temperature drops and the river stays at a constant level for a prolonged period of time and when I am not out with people on the river I will be out myself taking full advantage of this extension to the fly fishing season whilst fishing for these magnificent fish.
Posted by Clive Mitchelhill at 23.10.10 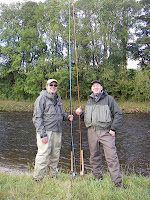 There have been some good waters over the last week or so and some not so good with the water heights up and down like a yoyo, but when the water has been holding steady or falling and clearing, (whilst we are not seeing many fish) there have been a few good opportunities to catch a fish or two and we have taken advantage of them.
Steve Earl and Mike Donaghue were with me toward the end of last week and they were predominantly interested in the Spey casting 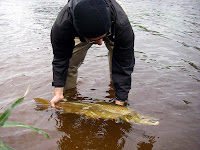 techniques as aposed to just fishing although they did dabble a little bit toward the end of the day when their casting had most definitely improved, but despite quite a good water the fish did not oblige although to be fair to the guys they only actually fished for a very short time.
Following there successful visit last year Christian Woolfenden (above left) and John Schofield (right) arrived the next day for 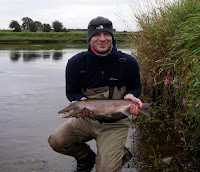 another two days casting tuition and fishing and once again they kept up there 100% record  with two cock Salmon of around 10lb and 5lb both of which they returned as they were a bit on the coloured side, although this did not stop them giving the lads a run for their money as they were very hard fighting fish. Well Done!
Piaras, Conal and Ryan travelled over from N. Ireland for what was to be their second visit to the Eden with me, only to encounter mixed conditions on the river and when there are not many fish showing at a time when there should be plenty it was hard work for the lads at times. 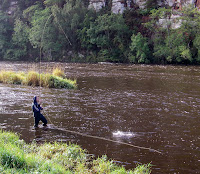 With the water rising slightly during the first day on Warwick Hall and more rain falling with only one or two fish showing, nobody caught, although Piaras did make contact with a fish on the fly but lost it, despite the beat producing 17 fish to 26 and a half pounds the week before.
The next day we were higher up the river and fingers crossed for the water to drop, but when we got there it was still holding a fair amount of colour which did begin to clear toward the end of the day and this time it was Conal's turn to make contact with a Salmon on the fly only to lose it too, although he did catch a trout on a tube fly as a consolation prize. 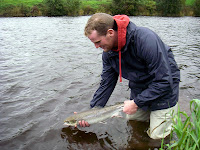 The final day was to be on the lower Eden and with the rain we had encountered the previous day as well as there being three rivers below us all entering the main system I was a bit sceptical of their chances, but after checking it out the evening before I was pleasantly surprised with regard to water clarity which left me a little more optimistic and sure enough when we arrived the next day, although the water was high, the colour was good and the day produced some good sport albeit with mixed results which saw the lads hooking and loosing three fish between them, one of which looked to be a big trout but the other two definitely Salmon including a very good double figure fish which we got 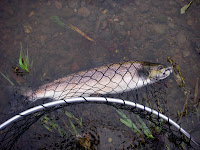 a good look at before it parted company and to top it off Ryan managed to hook and land two additional Salmon a cock fish and a hen fish. Nice one lads!

Since the lads returned home the water has yet again been up and down like a yoyo with some unfishable days, but as usual it is coming good again and I will be out on the river tomorrow for more of the same.
Posted by Clive Mitchelhill at 7.10.10