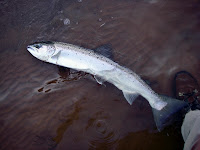 Despite the cold weather there are early signs of Spring in the air, with Snowdrops appearing, and Daffodils beginning to push through in places, but despite some really good catches of quality fish in recent years, the Grayling fishing has continued in its trend to prove difficult this winter, most certainly on the mid to lower river anyway.
There have been many reports of Salmon still spawning into February this year, which is probably due to the extremely low temperatures we have experienced through the winter months, as low as minus 17 degrees at times. I think that would slow me down a bit too if I were a Salmon. There has also been a few baggots reported, caught and returned, but the good news is that there has already been a handful of spring fish caught too, which is always a good sign.

Still relatively quiet though at the moment, apart from Salmon Kelts, which at least tells us that many fish have already spawned, despite those noticably late spawners. If you do catch a really "well mended" Kelt on your travels, and you are not sure how to distinguish it from a clean fish, (which can be difficult at times, especially if you are new to the game) look out for some of those tell tale giveaways displayed by many Kelts, such as Gill Maggots, (a small parasite living in the fishes gills) or an extended vent, denoting spawning activity, (see pictures) they are also generally narrow in feature with a distinct level belly, and although clean looking, they will not display the lustrous sheen that you will see in a Spring fish.

One or two people are now beginning to venture out though, even if it is only to get in some casting practice, ready for the new season, which I might add, did start (for Salmon) on January 15th on the Eden. Let's hope it's a good one!
Posted by Clive Mitchelhill at 21.2.11