The Best of the Weather in Ireland and Wales

﻿
﻿I flew over to N. Ireland on the 1st July for the Irish International Fly Fair, held in Killyleagh. This is an annual event, now in it's 4th Year, which is going from strength to Strength, attracting interested parties from all over the world. The show has a fantastic setting with the beautiful Strangford Lough at the bottom of the hill and the casting demonstrations and teaching sessions delivered within the fairytale style castle walls, where we were staying for the three nights, and to top it off the weather for the show was fantastic, which always helps.

﻿On my return I took some time out in the Scottish highlands, where the weather was a bit changeable, but the scenery was awesome, although this was just a stop gap before travelling ﻿to Wales in the heart of sea trout country, where I stayed with my good friend Illtyd Griffiths in preparation to spend two nights on the river Dovey. Illtyd's knowledge of sea trout fishing is vast, although he will not put any emphasis on that, but believe me if there are fish about he will put you on to them, and this trip was no exception. 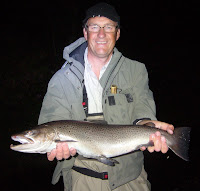 The first night I hooked and lost what felt like a very big fish, and believe me there are some big fish in the Dovey, and just when I thought I had blown my big opportunity, Illtyd took me further down stream and put me straight onto another one, but this time I landed it, a cracking cock fish of 7lb 2oz. "What a night". Anyone thinking of doing some guided sea trout fishing in Wales I recommend you contact Illtyd. His website details are as follows: http://www.sewincaster.co.uk/

Following some exceptionally warm and sunny day time weather, the second night just got better, and when I eventually entered the water, (on dusk) the fun began, and between three of us, we managed to hook around a dozen fish, not all of which were landed, but I did manage to land three of them. Two around the 4lb mark and one about 5lb and that's not to mention the quick grabs and nips that we encountered down the pool. The final outcome was eight fish and the sport was phenomenal.
I returned to the Eden on Saturday to do some casting tuition on the middle river where I saw a couple of nice Salmon showing, and a good sea trout, and my intention was to fish the lower river yesterday, but the water began to rise and colour badly which unfortunately scuppered my plans for a while.

A few casting tuition and fishing sessions lined up for the rest of the week with people coming to learn both trout and Salmon techniques and then I am off to the C.L.A. Game Fair at the weekend. http://www.gamefair.co.uk/ Speak again when I get back.
Posted by Clive Mitchelhill at 18.7.11