Good Salmon Catches on the River 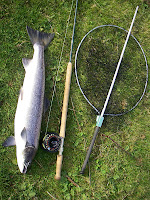 Although I have had a few people for casting lessons over the last couple of weeks, I have also had to cancel one or two fishing sessions due to high water conditions, but when the water has been dropping and clearing there has been some very good Salmon catches throughout the system.
I even had time to do a little Salmon fishing myself on Friday 16th when I managed to land a nice cock fish of 9lb 3oz on a Rio AFS floating shooting head kit with a 5ft fast sinking tip attached and it was one I kept for the pot, not just because it was a cock fish, but because I always keep three fish per season for personal consumption and this was to be one of them. I am a great believer in conservation and when executed correctly this should be commended, but I also believe that if we are sensible when we go fishing we should not totally dismiss the hunter gatherer inside us all. 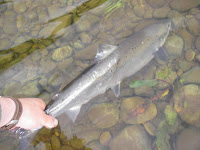 Following a casting session on Saturday 17th I managed to wet a line once more with almost the same set up as above but this time with an intermediate tip attached as opposed to a fast sinking tip and I managed to land a very fresh hen fish of around 4lb which gave an impressive account of itself for such a small fish although needless to say it was immediately returned to the water to go about its business.
The following day Angela and Derek Marshall arrived for some Spey casting tuition and Salmon fishing and since the last time I saw them their casting had really improved so with a few fish bouncing around the pool

things looked very promising but despite what appeared to be a good water their efforts were not rewarded and towards the end of the day it had become apparent that the river had risen yet again which is not always conducive to good catches as you will know as well as putting many beats out of order again for the following  day. 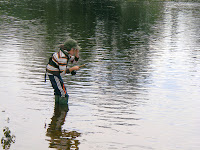 During the week I have been involved with Borderlines the not for profit company that introduces people from all backgrounds to angling and this week we were completing a project for the schools known as the "Future Fish" project in partnership with the S&TA where we as Borderlines introduced 47 youngsters not only to angling and related topics but also to the environment and the benefits of looking after that environment for the future. What better place to do this than the river which is a designated Site of Special Scientific Interest (SSSI) and a Special Area of Conservation (SAC).
"Oh" and whilst we were doing this the river was coming back into good order again ready for 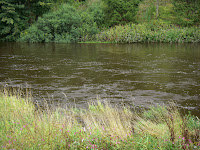 some more good Salmon fishing with several reports coming in of fish being caught all along the river. As all you Salmon anglers know it is not so much the height of the river that can often dictate good fishing but predominantly the colour and at the moment it is fining down nicely.
Posted by Clive Mitchelhill at 24.9.10

Mixed Conditions on the River

Low and high water conditions over the past week or so have afforded some mixed opportunities on the river with the middle reaches and above seeing some very difficult conditions for Salmon fishing as Andrew Hall and party found out, with some areas not even giving us a glimpse of fish, whereas David Bowe (pictured left) who was with me on the lower river saw Salmon fishing from the other extreme with at least 30 seperate fish showing in the beat throughout the day and not one tempted by the fly. In fact on more than one occasion Salmon were jumping so close to him 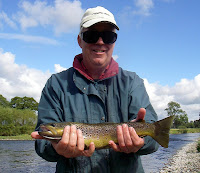 you could have almost touched them and some good fish too. Following some tuition, David was trying Salmon fishing for the first time and after a casting session in the morning he was putting out some nice lines but unfortunately in this case the Salmon did not appreciate good casting as those of you who indulge know very well. 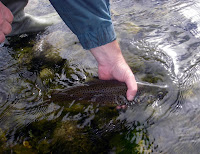 and mid week and as well as a few small fish and loosing a good fish he did manage to hook play and land (very skilfully I might add) a cracking fish of around two and a half pounds, which he insisted on returning to the water "well done", but not before getting a quick snap as you can see.
Phil, Lewis and Craig were with me on Saturday, initially to do some Trout fishing but unfortunately although the river was in good order when they first arrived, not long after that it began to rise and continued to do so throughout the day, but they did have the opportunity to do some Salmon fly fishing albeit for a short period before the water became too coloured at which point we concentrated more on the casting techniques that would come in handy for both Trout and Salmon fishing when conditions improved and I have to admit they were good company too.
Yesterday I was with Andrew and Ian who 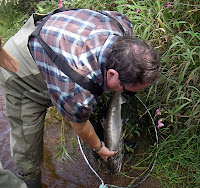 came to do some Salmon fishing on the lower river. With the water still running high but falling and clearing very slowly, (which incidently was almost a carbon copy of their visit last year) Ian landed a very fresh fish of around 6lb and being a hen fish it was promptly returned to the water. In their last two visits they have managed to chalk up a result of two nil in their favour. The only difference this time is that it was Ian who caught the fish whereas last time it was Andrew who landed a nice specimen of around 14lb which incidentally was also a hen fish.
Posted by Clive Mitchelhill at 13.9.10 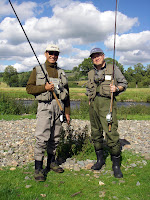 On Friday 20th August we did get the rain that was forecast which did put the river up and coloured. This put the majority of Saturday out of order for fishing on the river although it did begin to clear higher up the river towards the end of the day with the lower river still holding plenty of colour. This was a shame because I had Alex and Yuji (originally from Japan) with me for their first taste of Salmon tuition and fishing, needless to say we dedicated the whole of Saturday to casting tuition to get them up to speed partly because of the conditions we encountered, although they did have a chance later on as the water began to slightly clear higher up the river. Sunday saw a nice water higher up the system but with no Salmon obliging, although Alex and Yugi managed a couple of good trout instead, meanwhile on the lower river although still very coloured I had reports of a few Salmon caught on spinners. 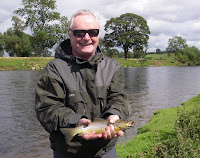 Monday and Tuesday saw Alan and Stewart Cape (Father & Son) with me for a bit of Salmon casting tuition and Trout fishing (pictured here) and following a little more heavy rain late Monday afternoon I expected the river to be up again on Tuesday morning, but not so, and the water was once again in good order on the middle river, although the majority of Salmon being caught were further down the system with some good catches.

On Thursday Martin Buss who was on holiday near Ullswater came for a days Brown trout fishing with his son Harrison and between them they caught several small fish on the fly, but the highlight of the day was when 10 year old Harrison (pictured below) played and landed his first ever Brown Trout a nice fish as you can see from the picture. 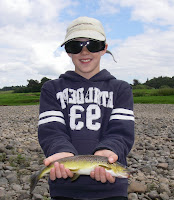 As the week progressed towards the weekend the weather turned drier and brighter and the forecast for now is for a very dry bright week which we are most certainly getting at the moment, and as you may know this is not good for the Salmon fishing at what is usually a very good time of year. That said we had some mixed chances last Sunday with Doug Douglass and his friend Mike connecting with five Salmon throughout the duration of the day but with fish taking the flies and crashing on the surface at times no fish were actually landed which was very unlucky, but it does show that they are there and willing to take the fly in the first place which is always a good sign.
I was out with Fay Larkins on Monday morning who managed to hook and loose a very nice Brown Trout which gave a good account of itself but unfortunately parted company with the angler once again. In the afternoon I fished on myself for a while and managed to land a couple of small Brown 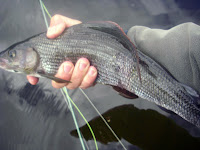 Trout and some very good Grayling on the dry fly, one of which had to easily be weighing in at around two and three quarter pounds, I don't think it would have quite made 3 pounds, but a fantastic specimen all the same. I did manage to get a photograph but it was difficult to hold it far enough away from the camera to get it all in and focussed as I was on my own and it was not behaving itself as any of you who fish for Grayling will know they are very powerfull fish in the hand and can be difficult to hold still. So although I have missed the tail of the photo you can at least get a good indication of the size of the fish from this snap.
Posted by Clive Mitchelhill at 3.9.10