A mixed bag over the last week with one or two reasonable trout to around a pound and a half and Grayling to two pound, but generally a lot of small fish in this category with more Brown Trout than Grayling which has been the trend of late with the dry fly tempting the bigger fish at the moment.
This last week also saw more Grilse entering the river with a few 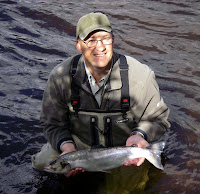 good Salmon showing amongst them and whilst targeting these fish at the weekend we did manage to land a nice fresh Grilse of around 5lb (for the pot) and lost a very nice, very fresh Salmon of around 12-15lb which gave a very acrobatic account of itself before parting company with the fly at the 11th hour, "oh well at least we got a good look at it". With a couple of additional brief encounters with these fish they were certainly up for it and I know there were one or two others taken further up river.

The last couple of days have been away from the Salmon fishing and dedicated to casting tuition and trout fishing higher up the river with some success, however whilst putting his new casting techniques into practice, Tony (pictured here on the left) found that although he did manage at least a dozen fish, as usual the bigger fish were proving harder to tempt as the season marches on.
There are spells of heavy rain forecast over the next week so we will see how this impacts on the Salmon fishing as we draw further into the prime fishing time on the River Eden for these Silver Tourists.
Posted by Clive Mitchelhill at 19.8.10

The Grilse Are In 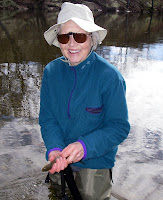 I was on the river with Fay last Wednesday who is a regular visitor to Border Game Angling. With no surface activity whatsoever we set up with two small pheasant tailed nymphs which turned out to be the business. Unfortunately the larger fish proved to be illusive but Fay did manage to catch and return 13 small Brown Trout which did keep her very busy throughout the session. 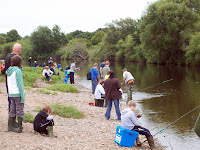 At the end of last week we held a youth event for the Carlisle Angling Association under the Borderlines banner and with some very welcome help from committee members Graeme Proud, Colin Pulmer, David Altham and George Pearson, along with some fantastic assisstance from Rebbecca and Joanne from the Eden Rivers Trust, the day was very successful with 88 youngsters attending along with other family members bringing the total attendance to well over 100. The day included fly tying, fly casting, fishing, entomology and lots of information about the environment and 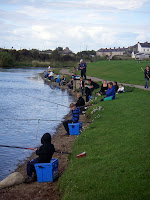 fishing related subjects. Hats off to the C.A.A. for sponsoring such a great day and promoting angling and the benefits it can bring to those who care to participate.


I have also been involved in many more fishing sessions with Borderlines over the last couple of weeks introducing younsters and families to fishing of all kinds on both stillwaters and rivers including the River Nith and the Border Esk which has been very rewarding.
Plenty of Spey casting tuition with the Salmon fly rods again, and as people were getting to grips with the techniques required whilst on the river Eden we saw on more than one occasion several fresh run Grilse

arriving in the system at last, but up to now despite some of the guys covering the fish very well they are certainly not in a taking mood, but with the Haaf Net operators also seeing very large Grilse runs entering the estuary then it should only be a matter of time before more fish are caught.
We did get an additional small rise of water on the Eden on Saturday albeit very peaty which usually indicates that the river Eden has been influenced by one of its upstream tributaries known as the river Irthing, this can seriously effect (for a period of time until it begins to clear) the fishing downstream in a negative way, but that said, I was much higher up the river yesterday above this tributary and the water was also very peaty suggesting that at least not all of the additional water was from the Irthing alone. This certainly did make the fishing difficult 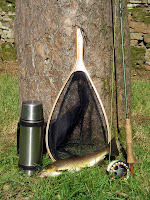 though as Fay found out on her return for another Trout session with only one small fish.

I continued on Yesterday afternoon for a couple of hours on my own and despite missing a couple of offers on the nymphs and one lost fish, I did manage a nice Brown Trout of around one and a half pounds at the 11th hour on a size 14 Dry Greenwell's Glory. A nice way to end the afternoon.
Posted by Clive Mitchelhill at 9.8.10