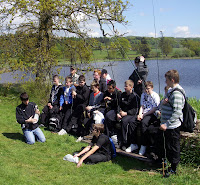 For those Salmon fishers amongst us we are now desperate for rain, with some of the lowest water conditions we have seen for a long time at this time of year. Those of you who have recently ventured out though may have encountered an unexpected surprise as quite a few very nice sea liced Salmon have entered the river regardless of the low water conditions and offered some very good sport to anglers on the lower beats.

Once again I have been working with schools under the Borderlines banner, introducing youngsters to the joys of entomology identifying the creatures that the fish feed upon and their importance to the environment, often helping us to identify how healthy our waterways really are, before moving on to future fishing sessions.
On Saturday 22nd May along with fellow AAPGAI instructor Jim Fearn, we set up a casting and fishing demonstration day for Carlisle Anglers on the lower river sponsored by Guide Fly Fishing which was based around the advantages and disadvantages of shooting heads and Skagit lines

and their applications. The day was well received by all and the feed back was good.
The low water has not put the trout off and we have had some nice fish up to 2 1/4lb although when the weather gets hot and bright it has been quite difficult at times as you would expect. It does keep threatening to rain and has done in some areas of Scotland, but it is still giving us a wide birth at the moment. Time will tell.
Posted by Clive Mitchelhill at 30.5.10 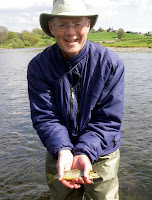 As previously mentioned, the persistent low water conditions we are all experiencing does not suit everyone, especially the Salmon anglers amongst us. That said, I can never undersatnd why the Salmon anglers do not turn their hand to the excellent trout fishing that is available on our rivers when water is at a premium, especially the river Eden which generally fishes out of it's skin in the early part of the trout season and can continue to do so given the right conditions. The insect life is really building up now and with the wind now predominantly South Westerly (at the moment) as apposed to that persistent North Easterly

we have been experiencing things can only get better and I am sure you can all feel the difference in temperature over the last couple of days.

I tested the water for Sea Trout through the night at the weekend with only limited success although I did hear a couple of nice fish in the dark and although we have seen a few good fish throughout the day along with several small Sea Trout and lots of Herling (immature Sea Trout) there were not a lot of fish active in the pool I was fishing, which may have been suited better by a little more cloud cover and not the clear sky that

I have had some very nice ladies and gents trout fishing with me over the past few days including David, Bill and Fay all pictured here, who between them caught a few good trout and a few smaller ones too. Also a couple of good Spey casting lessons with the double handers with Colin and Bill who turned his hand to both Trout fishing and some of the Salmon Spey casting techniques.
Posted by Clive Mitchelhill at 17.5.10 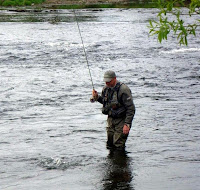 In between Spey Casting tuition I have actually had the chance to do some Brown Trout fishing of my own and what a time to get the opportunity to do so as these fish have really switched on especially on the lower river. I was fishing with a friend and we lost count of the amount of good quality fish we caught. I did intend to keep a couple for the pot but found myself caught up in the moment. We also had a few plump little herling which we returned to fight again and following this I had two amazing encounters with a couple of big Sea Trout on light tackle around the 3 and 4lb mark, the

second of which proceeded to strip the whole fly line and a bit of the backing from my reel before parting company with my 3lb point.

Following a Spey Casting session higher up the river with Tony who has been preparing for his Provisional AAPGAI casting qualification over this last year, we both took turns with the trout rod whilst the other watched the water for movement and although we had a few Brown Trout they were not as good in quality as the fish in the lower river, which is not uncommon at this time of year, but this certainly did not make it any less enjoyable. 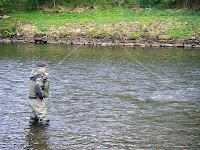 Although it has still not fully warmed up yet with snow still clearly visible on the pennines, the fly hatches are still building up and along with those we have already identified, additional species are now beginning to appear and on Saturday I saw the odd Large Brook Dun being devoured by a trout or two as well as witnessing a few hawthorns yesterday with their distinctive dangling legs.

There are also a few Salmon sneaking into the lower beats on this low water and if we can get some fresh water in the near future there may be one or two caught,

although the low water will not prevent the Sea Trout negotiating the faster runs through the twilight hours and into dark and if we can get some overcast (moonless) warmer nights then this could be the time to target them as they are most definitely in the system.
Posted by Clive Mitchelhill at 10.5.10

On the river and at the Tweed Angling Fair 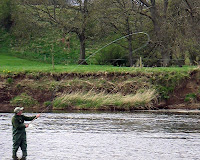 On the river with Pat last week, he was on holiday in the Lake District and wanted to learn how to Spey Cast with the double Handed Salmon rod and by the end of the session he was doing a good job considering it was his first time.
I was then off the river for a few days whilst working with schoools in SW Scotland introducing youngsters to Entomology which was there second session in a series of sessions designed to build up the whole environmental picture. I was then off to the Tweed Angling Fair which I attend annually as part of the AAPGAI demonstration team for fly casting as well as providing the

casting tuition at the event with the rest of the team. The show is a great event for anglers and if you haven't been before it is well worth putting next years date in your diary which is usually the first weekend in May.
Back to the river Eden again on Monday and the Salmon smolts are now beginning to drop down the river making there way to the sea to continue natures amazing

cycle, and the Brown Trout are now beginning to rise much more readilly on the river just waiting for a nice dry fly to tempt them. Monday morning was difficult but we had one or two in the afternoon although the action was very sporadic due to intermittent North East gusts of wind which kept switching the fish off again. Since then it has got a bit better with plenty of cloud cover and if the weather would make it's mind up and warm up for longer periods we are in for some good sport, and as well as the continuous hatches of Grannom sedges we are still seeing, other insect life is also improving on the river

and the Olive Uprights are now increasingly appearing on the water. I have also been hearing good reports from Lake Ullswater of some good catches of Browns. However with low water conditions prevailing this does not suit the Salmon angler and at least a few inches of fresh water would improve the situation, but as we all know, once it begins to rain it seems to forget to stop. We are never happy are we! 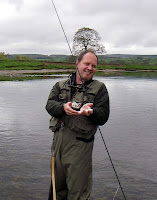 A bit more Salmon Casting tuition on Tuesday and a short fishing session yesterday with Ben and his son Rowan who were over on holiday from Holland, but unfortunately they only managed one small fish and lost another, although there were some really good trout breaking surface all around. Well that's Fishing!
With regard to the above reference to Ullswater Lake, if anyone

is interested in a boat fishing trip to the more productive bays on the Lake, I can recommend just the man to accommodate you. His name is Geoff Johnston and he is a qualified AAPGAI instructor who has fished the lake very successfully for many years. If you are interested, you can contact him at geoffjohnston@theeden.fsnet.co.uk
Posted by Clive Mitchelhill at 5.5.10