And The Rain Came 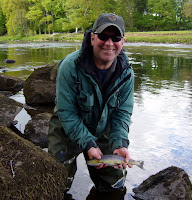 ﻿﻿﻿﻿﻿﻿As we moved into May the rain held off for a while, with just the odd shower here and there, which to be honest, did suit me, as I had quite a few people coming to do some trout fishing, and apart from the times when the odd top up of fresh water does often prove productive, I tend to find that low water conditions (not too low) can be just as good for targeting trout if you look in the right places, which once again proved to be the case as you can see from the pictures. We did have a few cold North Westerly winds at times, which chilled the surface, and put fish down refusing a dry fly, but when the South Westerlies kicked in we had some 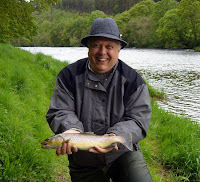 cracking catches (some doing better than others) and with a lot more insect life appearing in the form of, Olive Uprights, Iron Blues, Yellow May's, Large Brook Duns and a variety of Sedges and Gnats, to name but a few, fishing was good, with trout to 2 and a half pounds on our outings, and up to 3lbs reported elsewhere on the river. Excellent!
﻿﻿﻿﻿﻿﻿﻿﻿﻿﻿﻿﻿﻿﻿﻿﻿﻿﻿﻿﻿﻿﻿﻿﻿﻿﻿﻿﻿﻿﻿﻿﻿﻿﻿﻿﻿﻿﻿﻿﻿﻿﻿﻿﻿﻿﻿﻿﻿﻿﻿﻿﻿﻿﻿﻿﻿﻿﻿We did get a small rise in water as the weather forecast dictated on the weekend of the 13th and 14th which produced a few Salmon, with one angler taking 5 to his own rod on the Warwick Hall beat of the river, but fish were also caught on other beats. This was good news for those salmon anglers amongst us, and also, during a tuition and fishing session for trout on the lower Eden, with John Priest, he managed to hook a nice Sea Trout of around 3lb, which unfortunately parted company after a few acrobatic crashes on the surface of the water, but we know they are there. 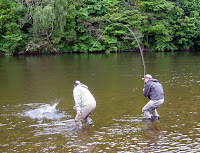 In mid May (Monday 16th) I was involved in the Cumbria Fishing Festival, which is held annually on the river Eden and surrounding areas in Cumbria. It is aimed at anglers of all abilities and offers something for everyone from the beginner to the more advanced angler. My job this year was to introduce anglers to some of the more intricate casts, which included the slack line casts for delaying drag when fishing a dry fly on flowing water, and showing some techniques to use to reach those awkward places on the river. The sessions went better than expected, as they were just really aimed at casting and fishing techniques, but I encouraged the anglers attending to put flies on whilst they were practicing and the outcome was fantastic, with 7 Brown Trout being caught over the two sessions, up to around a pound and a half (all returned at the individuals request) but we did get some excellent pictures to remember the day, one of which is shown above right.

Last week I was delivering a series of school sessions with my colleagues from Borderlines. This is one of the ongoing projects I am presently involved with, known as "The Fishing for Knowledge Project". It takes the youngsters on a progressive journey which gives them an insight into both angling and the environment. This particular stage was aimed at Entomology (the life cycles of the insects that the fish feed upon). It is also a very rewarding, and enjoyable journey for me too.
This weekend saw another big change in the weather system, (in Cumbria) which has brought in more rain and very strong winds up to 80mph, putting the rivers up to unfishable levels, and keeping us all away from the fishing. So I sit peering out of the window at even more rain as I am writing this, and although we did need some water for the Salmon fishing, (and the flora) I can't help wondering if it is going to forget to stop again, as it often does, although the rivers are dropping again at the moment and the forecast does look promising. "I think April and May have swapped places this year".
Posted by Clive Mitchelhill at 24.5.11

The river has continued to shrink throughout the month as we have just endured the hottest April on record. Great sunbathing weather, but not the best of conditions for fishing. This was not entirely down to the glaring sunshine though, but the easterly winds that have accompanied it.
Despite this, we have at times, encountered some very good trout to 2lb, continuing the trend from last month. We have often had to fish a little deeper with a gold head or two, as the spiders have not been the force

they can be at this time of year (yet), although if you were prepared to persevere with a dry fly on very baron looking surface water, you could bring up a good fish or two, as Doug Douglass, who was having a session with me on the lower river will tell you, as will Simon Harris with a nice trout shown in the picture above taken on his mobile phone, as my camera decided to pack up on me, and Fay Larkins who has landed a couple of good fish recently on the middle river of around 1 1/2lb and 1 3/4lb (pictured left).
﻿When having the patience to persist with the dry fly, the adams was once again top fly and has been quite a consistent fish catcher as there has not been a great deal of fly life in attendance, although we have had some good grannom hatches which did not seem to inspire the fish in any numbers to take the adult fly.
The dedicated Salmon anglers are pulling their hair out at the moment with very low water and generally poor conditions for this type of fishing, but that said, there seems to be a possibility of light at the end of the tunnel, with rain forecast as we move into May toward the end of this week, but the long term forecast seems to predict more of the same dry 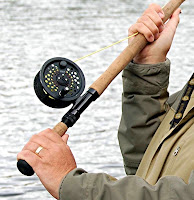 conditions, we will soon find out. It hasn't stopped anglers coming along to brush up on their casting though, which is what I will be helping people with over the next few days. It makes sense to do it now before the rain does eventually come, because believe me it will, and when it does it usually forgets to stop. Anyway very busy in May, so hopefully there should be a lot more to report. See you next time!
Posted by Clive Mitchelhill at 4.5.11